CrossFit OKC is here to show you A way, not THE way.  There are many paths to fitness; we like to think ours is the most fun.  We’re here to nudge you forward when you need it, to hold you back at times, and to make you laugh through tough situations and obstacles.  So come train with us, learn with us, laugh with us, grow with us.  Come see what you’re capable of.

THE HISTORY OF CROSSFIT OKC

CrossFit OKC was founded in 2006 by Jason Boag. Jason was truly a CrossFit pioneer in Oklahoma City and the state of Oklahoma. Ginny King began training and coaching at CrossFit OKC in 2011 and became the director of training in 2012 when Jason and his family moved out of state. The gym officially changed hands in the early summer of 2016 and Ginny became the sole owner and operator of the gym. CrossFit OKC has became a second to home to it’s athletes.

CrossFit was pretty unknown in 2006.  In fact, CrossFit OKC was the first CrossFit to open in the Oklahoma City area. Now there are at least 17 CrossFit gyms in Oklahoma. The owners of several of these had their start training  at the CrossFit OKC location. 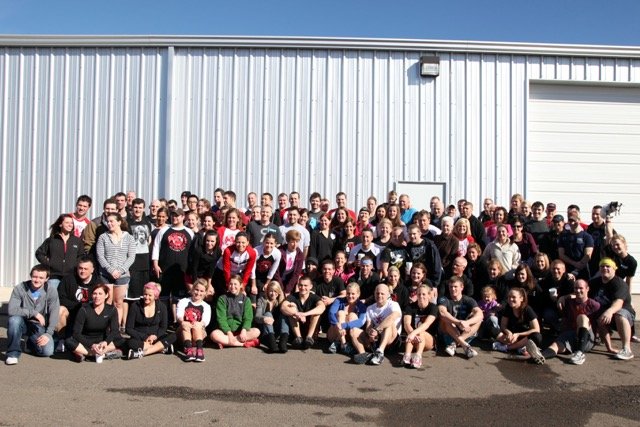 CrossFit  OKC has really grown in the past 9 years.  In October of 2008, the gym moved to its current location more than tripling the space.  Equipment needs are constantly increasing.  The gym now has over 5000 pounds of free weights and 30 weight bars to accommodate male, female and beginning lifters.  The pull up station has accommodated up to 38 athletes at once and has been the design inspiration for several other gyms.  The gym has successfully hosted the CF Endurance, CF Olympic Weightlifting, CF Mobility, and CF Level One Certifications.

It is evident that keeping up with the latest training techniques and continuing to increase knowledge of human movement is a pursuit the trainers at CrossFit OKC take very seriously.

Even though the gym has grown substantially, personal and individual attention has not diminished.  Classes seamlessly blend serious athletes out to meet their full potential with everyday individuals who come just wanting to get in shape and end up finding their inner athlete.  All this is accomplished with expertise, patience, and just plain fun; creating a place where members truly feel they belong, are cared for, and where their absence would not only be noticed, but missed as well.

WORKOUT OF THE DAY